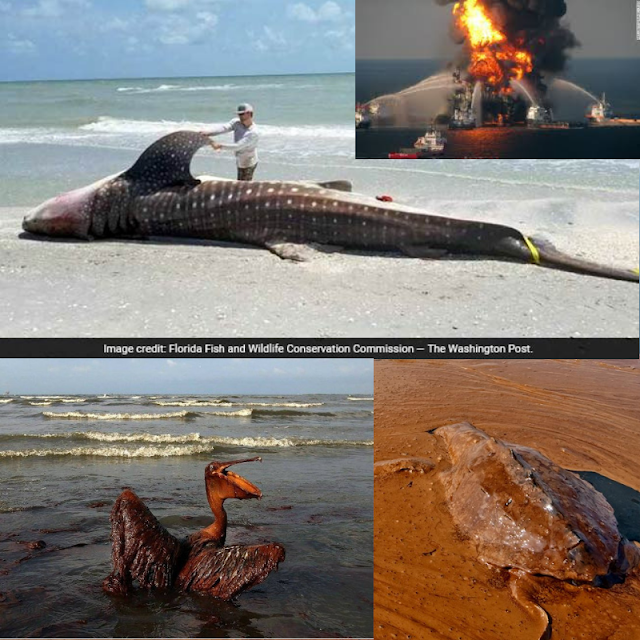 Back 8 years ago, those of us that worked diligently on getting info out about BP's Gulf Oil Disaster predicted the collapse of the populations of sea-life, seabirds, mammals and we noted that even humans would be affected along with our precious waterways, the beaches and our land here in Florida and indeed, throughout the Gulf region. We contacted corporate media, did interviews with independent media, many of us became the independent media ourselves and did our own radio shows, scrutinized documents, attended public meetings, took samples, blogged, protested in the streets and  spent hours on the phone or on social media connecting with thousands of people globally. We developed our own networks here in the Gulf Region. At that point many of us knew that the ecocide and genocide happening here would be politicized and monetized through those running for office, campaigns would take donations and others would be supporting themselves through the so called environmental NGOs whose main objective was to raise funding. And the oil companies and extraction industries OWN the city municipalities, the state, the candidates, the tourist boards, the County Fairs, the Better Business Bureaus, and local companies, in reality EVERYONE! Their money that was flowing into our communities paved their way so now they literally OWN us.

Add to the existing toxic soup of Crude and Corexit dispersant, the Lake Okeechobee discharges, Big Sugar, Roundup and other herbicides and chemicals associated with Big Ag, nitrogen fertilizers that are over-applied, nuclear radiation dumping into city water sources courtesy of the Mosaic Company, Algenol Company, mining by Cemex (for fracking sand and aggregate), Pipelines such as Sabal Trail and existing radon associated with even more building and expansion and other toxins.

Our resistance to this ecocide and genocide should never follow a corporate model. That is why it has not worked in the past. We need bodies on the line now. We might not survive this, but we need to do this for those who will come after us.
Voting the s-elected out is not an option.
Now is the time for real resistance.

Links about the science of the spill below.
I will keep adding to this list.
***Crude/Corexit CAN cause Red Tide.

Posted by Anita Stewart at 3:55 PM No comments:

Many in the regional southeast of the U.S. know very little or nothing at all about the Sabal Trail Pipeline that is being constructed now and projected to be completed in May of 2017. This pipeline will be moving fracked gas (methane) from Alabama through southeast Georgia and intersecting almost the entire state of Florida. It is important to note that this project was approved and construction has begun. In addition, there are storage areas, staging facilities and compressor stations all along the 515-mile route.

Many people along the route or in close proximity, renters included are not even aware that this pipeline is being constructed so close to their homes and property. In total, approximately 160 eminent domain lawsuits have been filed by Sabal Trail including the one involving the Bell brothers. Now the Bell brothers are involved in a legal precedent to pay for Sabal Trail’s legal fees to the tune of $47,000.

After reading Jeb's heartbreaking story on a Fusion article that was also reprinted in Newsweek and interacting a bit with him on the social networks, I had an opportunity to interview him (from Mitchell County, Georgia) on September 20, 2016. I thought his story was important and needed to be retold, as his legal eminent domain precedent can happen to any landowner at any time. Eminent Domain is making theft of land from landowners legal if the corporations are doing it. http://fusion.net/.../southeast-gas-highway-upsets.../

The Bell family’s GO FUND ME page to help with their legal fees (VIDEO): https://www.gofundme.com/2pgabdvh

Five days after Royal Dutch Shell reported an estimated 88,000 gallon crude oil leak in the Gulf of Mexico from its operations in the Glider field, the oil company and the U.S. Coast Guard agreed to halt skimming operations used in the cleanup because they were no longer finding recoverable oil.
Both entities stated that no environmental damage has been reported, but independent monitors from Greenpeace, Vanishing Earth and Wings Of Care question whether the size and potential impact of the spill are being downplayed.
News of Shell’s oil spill 90 miles south of Louisiana’s Timbalier Island came the day before the Bureau of Ocean Energy Management (BOEM) hosted a final week of public meetings on the Gulf Coast to give the public a chance to comment on itsFive Year Plan 2017-2022 oil leasing program. Its plan calls for lease sales of 47 million acres of the Gulf of Mexico to oil and gas companies for offshore drilling on the Outer Continental Shelf.
Shell contracted Clean Gulf Associates and Marine Spill Response Corporation (MSRC) for the cleanup operation. MSRC, one of the companies BP used to clean up its 2010 spill, dumped the dispersant Corexit in the Gulf.
This time, “dispersant wasn’t used,” the Coast Guard told DeSmog. The Coast Guard and Shell agreed that using on-water recovery vessels and skimming would be the best oil recovery option.
Environmental scientist Wilma Subra, though pleased dispersant wasn't used, told DeSmog, “Skimming is not a very good oil recovery option.”
Subra believes that if skimming is the best cleanup method the Coast Guard and oil companies can come up with, it shows they are no better prepared for an oil spill than they were when the BP oil disaster occurred.

Shell oil spill in the Gulf of Mexico. ©2016 Jonathan Henderson
Environmental watchdog group SkyTruth concurred with Subra. They described the oil spill cleanup response as a bad joke. Last Saturday, Greenpeace photographed the site, taking with them Jonathan Henderson, founder of Vanishing Earth, who also documented the spill.
“I counted three vessels skimming oil,” Henderson told DeSmog. “It’s ridiculous that our federal government has basically sat back and allowed this industry to invest the vast majority of its money on exploration and extraction and not nearly the level of investment in response technology that is so critical whenever something like this goes wrong.”
On Wings of Care, another environmental watchdog group, flew Dr. Ian MacDonald of Florida State University over the spill site on Sunday. SkyTruth’s blog revealed that

“Dr. MacDonald observed that the response vessels seemed to be missing the thickest parts of the slick and were generally making very little headway, despite operating under fairly calm conditions (average wind speed of 7 knots recorded at Brutus TLP over this time period), nearly ideal for oil cleanup operations.”

“Oil spill response vessels grossly underperform,” SkyTruth stated. Five spill response vessels were dispatched including four skimming vessels, according to Shell and the Coast Guard.
Not only was the cleanup effort not state of the art, the fact it took a pilot to spot the oil slick indicates Shell’s “pipeline leak detection is unreliable,” SkyTruth’s blog stated.

“That’s right: a modern pipeline at a high-tech deepwater development project leaked thousands of gallons of oil, and that leak was accidentally discovered. Not because high-tech telemetry on the pipeline signaled an alarm due to a drop in pressure; not because flow metering detected a difference between what was going in one end of the pipe vs. what was coming out the other.“

Both Shell and the Coast Guard stated that there has been no reported impact on wildlife. But Subra said it is impossible for an oil spill of this size not to have environmental consequences.
“Of course organisms at the spill site were impacted,” Subra said. “Some fish at the site must have died and other fish and mammals will get sick from the oil.”
A Shell press release identified an underwater flow line near its Brutus platform as the source of the leak and stated the damaged section “has been isolated.”
The Bureau of Safety and Environmental Enforcement (BSEE) is leading an investigation to determine the cause of the release. The agency has approved Shell’s plan to resume production at the Brutus platform though part of Shell’s Gilder operations remain “shut-in.”
Whatever the cause of the leak, Shell acknowledged that no spill is acceptable, a point environmentalists and activists have reiterated, while objecting to BOEM’s latest 5-year plans to lease an additional 47 million acres in the Gulf for drilling.
Cherri Foytlin of Bold Louisiana created a petition insisting any new oil development follow through on President Obama’s promise to “change the way we manage our oil and coal resources so that they better reflect the costs they impose on taxpayers and our planet.”
Bold Louisiana calls for an end to all new leasing in the Gulf.

Jonathan Henderson at a rally before a protest against BOEM’s Gulf of Mexico lease sale in the Superdome in New Orleans. ©2016 Julie Dermansky
Henderson and Foytlin took part in a protest during BOEM’s Gulf of Mexico lease sale at the Superdome in New Orleans on March 23.
“While we did not successfully stop the auction,” Henderson said, “never before in history has the industry been confronted like this in this region and the momentum from that historical day will continue forward.”
A Gulf Coast delegation that converged on the Superdome also took part in “Break Free” protests, demonstrations that took place on six continents calling for bold action to break free from fossil fuels.
At the Washington DC  “Break Free” protest on May 15, activists called out Shell’s latest oil spill as an example of why offshore drilling must be stopped.
BOEM held public meetings across the Gulf Coast this week that Foytlin encouraged people to participate in.
“We are not willing to let the Gulf of Mexico be a sacrifice zone any longer. Further, we are calling for a just transition for all of our communities to a clean, green economy, one that is both respectful to the life-giving systems of our planet and truly benefits the people of our region.” Foytlin told DeSmog.
She doesn’t think coastal communities are sustainable if nothing is done to protect them, and expanding drilling in the Gulf is a move in the wrong direction.
Though Shell and the Coast Guard are quick to point out none of the oil from the Shell spill has been found on Louisiana’s beaches, Subra said she would be surprised if none of it washes up on the Louisiana coast.
“It is impossible to dismiss environmental impacts from even a small spill,” Subra said, “and an 88,000 gallon spill is significant.”
Main image credit: Jonathan Henderson with other activists protesting against BOEM’s Gulf of Mexico lease sale in the Superdome in New Orleans ©2016 Julie Dermansky
Posted by Anita Stewart at 11:33 PM 35 comments: